With increased economic growth in East Asia, emissions of many anthropogenically produced and emitted halogenated compounds in this region now constitute a substantial fraction of the global totals. However, the sources of halogenated compounds and the temporal variability of the source strengths in East Asia are poorly understood. Gosan station, of which baseline represent well the NH background concentrations and at the same time where most of continental outflow can also be detected, is an ideal place to monitor the halogenated GHG compounds emitted from the significant portion of East Asia. Measurement data of a wide range of CFCs, HCFCs, HFCs, PFCs, and SF6 are analyzed using an interspecies correlation method and a back trajectory model to characterize the regional emissions. The key research components are the followings:


- Identification of major industrial emission sources of the halogenated compounds from the observations at Gosan using a positive matrix factorization (PMF), and determination of the potential source regions and emission magnitudes based on a Lagrangian particle dispersion model (FLEXPART+/FLEXINVERT).
Gosan observatory in Jeju Island is the oldest CO2 monitoring station in Korea running since 1991. The CO2 records at Gosan contain polluted signals superimposed on the clean regional baseline, representing Asian continental outflow. Given Gosan’s distinct location in the boundary of continent and ocean in mid-latitude, it is now important to properly determine the regional background concentrations of CO2 and then assess any changes in their seasonal variability.

The atmospheric CO2 reservoir interacts primarily with the oceans and with the continental biosphere. The biospheric process is a direct response of the atmospheric CO2 concentration to periodic uptake of CO2 by plants or release by soils. The interaction consists of a relatively slow exchange process between atmospheric and oceanic dissolved CO2. The combination of CO2 concentration and its carbon isotopic compositions measurements can provide additional information about production/consumption processes affecting atmospheric CO2. The key research components are the followings:


- Ultra-high precision ambient air measurements of CO2 using solid-state flow and pressure control of gas flow by NDIR-LOFLO CO2 analyzer system for in-situ, continuous measurements.
Methane CH4 is the second most important atmospheric greenhouse gas after CO2 yet its global sources and sinks are still inadequately characterized. The concentration measurements allow estimating total fluxes, but their association to individual sources is not typically possible with concentration measurements alone. Stable isotopic measurements can be helpful in disentangling source contributions for global and regional budgeting for CH4, since different sources have characteristic isotopic ratios ("fingerprints"), mainly due to different production processes. Thus, recent advances in laser-based spectroscopy, which brings forward the capability of measuring CH4 isotopic composition at high frequency and precision, should be evaluated in real environments. The key research components are the followings:


-Characterization and optimization of the CRDS δ13C-CH4 analysis system for the continuous monitoring of atmospheric CH4 isotopic composition at Gosan
The inverse method performs the optimal estimation of emission fluxes by combining "top-down" information from atmospheric concentration measurements and "bottom-up" information on emissions which are used as first estimate (i.e., a priori). Atmospheric transport models driven by analyzed meteorological fields relate assumed emissions to atmospheric concentrations at the locations and time of the measurements. The inverse modelling system modifies the emissions to obtain optimal agreement between simulated and measured concentrations. A first guess (a priori) map of emissions of the Greenhouses Gases (GHG) or Ozone-Depleting Substances (ODS) in question is put into the model in an attempt to reproduce the observed concentrations. The model then optimizes the emissions map (and other input parameters), according to their presumed uncertainties, to minimize the discrepancies between the actual measurements and the modelled abundance variations.


The inverse method that we use to address the regional scale emission is the FLEXINVERT-Plus model, a newly developed Bayesian inversion framework at the Norwegian Institute for Air Research (NILU). Atmospheric transport is modeled using the FLEXPART (version 10beta) Lagrangian particle dispersion model, which will be run using meteorological fields produced with the Climate Forecast System Reanalysis (CFSR) model providing an improved temporal resolution. 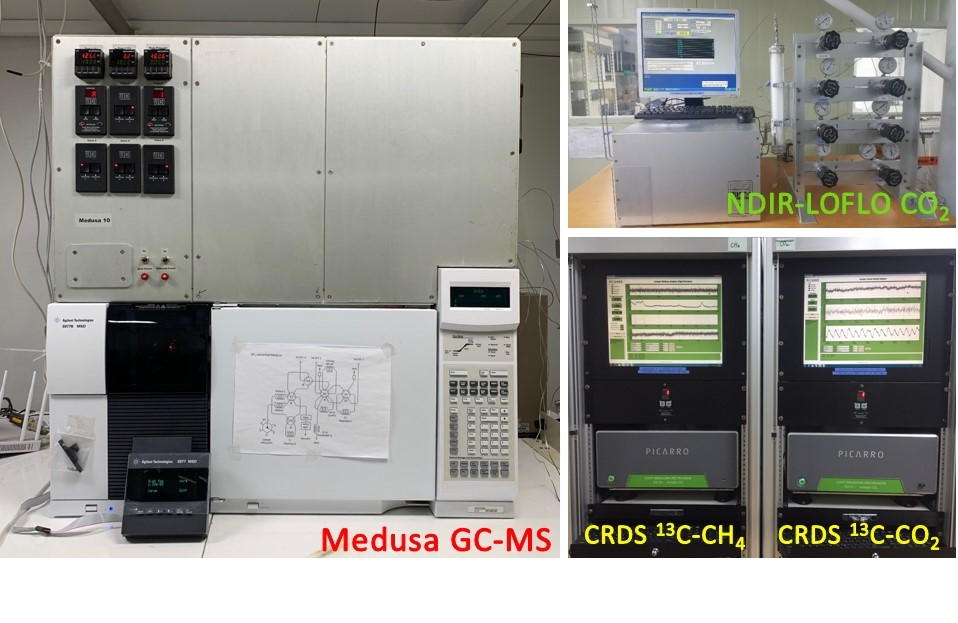 The Gosan station is located on a remote hill-top of the south-western tip of Jeju Island, south of the Korean peninsula (GSN, 33.25°N, 126.19°E, 72 m a.s.l) on the boundary between the Pacific Ocean and the Asian continent. It is Korean first monitoring station for natural and synthetic GHGs and ODSs in global networks.


The Gosan site hosts state-of-the-art equipment making high-frequency measurements of all major greenhouse gases and ozone-depleting substances including carbon dioxide, methane, and their carbon isotopic compositions. Gosan is part of the international Advanced Global Atmospheric Gas Experiment (AGAGE), which has been measuring the composition of the atmosphere since 1978. 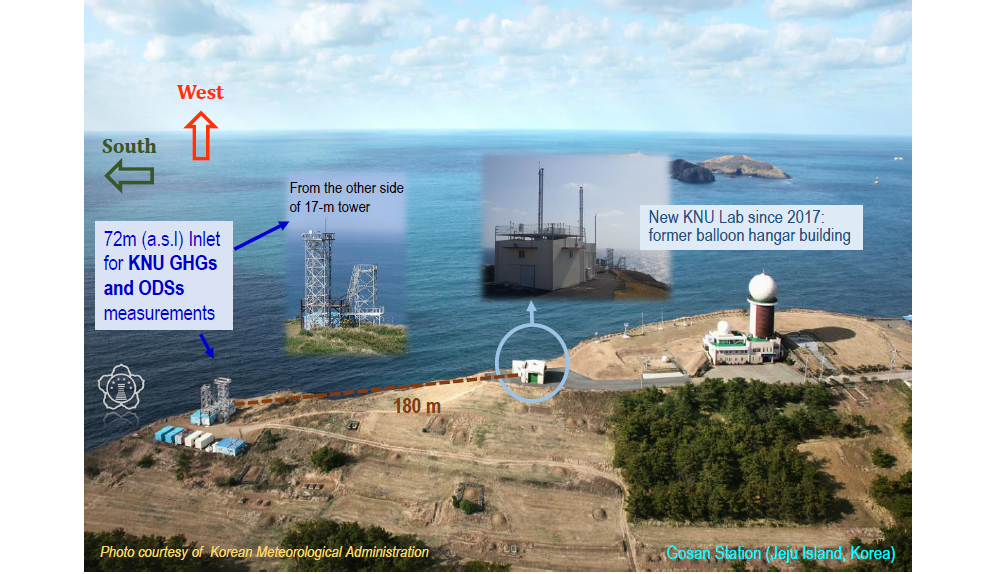